Manchester City playmaker Kevin De Bruynehas moved up in the race for the Golden Boot in the Premier League after his four-goal performance against Wolves on Wednesday night. The Belgian international took full advantage of the rescheduled league game to move closer to the top three players on the list of the highest goalscorers in the Premier League this season. 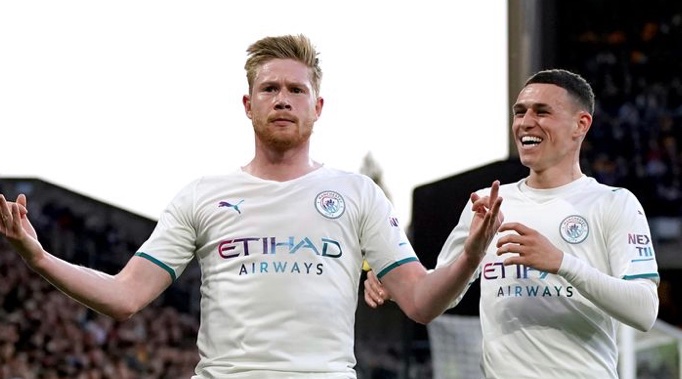 Belgian playmaker De Bruyne had 11 goals in the Premier League this season before the Wolves game and he was able to increase his tally to 15 goals with the four goals scored against Wolves. The former VFL Wolfsburg and Chelsea star had not scored a hat-trick in English football until the Wolves game. His four goals against Wolves ensured that the Belgian star moved level with the Liverpool duo of Sadio Mane and Diogo Jota on 15 goals. To this effect, Only three players have scored more than De Bruyne in the Premier League this season and they are Mohamed Salah (Liverpool), Son Heung-Min (Tottenham Hotspur) and Cristiano Ronaldo (Manchester United). Egyptian international skipper Salah has 22 goals, while South Korean star Son has 20 goals thus making him the immediate challenger to Salah. On his part, five-time Ballond’or winner Ronaldo has 18 goals in the Premier League on his return to Manchester United for his second spell this season.

The four goals from De Bruyne propelled Manchester City to a 5-1 victory at the expense of hosts Wolves and moved them closer to the Premier League title. De Bruyne and City are looking for a fourth league title in five seasons. They need four points from the last two league games of the season against West Ham United and Aston Villa to make it happen. They will win the league title if they beat West Ham United in front of their home fans this weekend and nearest challengers Liverpool fail to beat Southampton away from home.

In addition to getting the three points for Manchester City at West Ham United, De Bruyne would be hoping to score more goals against the London team to edge closer to the top three in the Premier League Golden Boot race.